Note: This is issue 3 of our newsletter (of November 24th 2021) sent out to our subscribers by mail every now and then. Interested to hear news and updates about Strongbox, KeePass, Password Management and the wider InfoSec world.

Hello there, we’re back with some updates on Strongbox and the personal password management world in general. Thanks for signing up and we hope you’ll enjoy.

Strongbox Zero (iOS) – For the Hardcore

This is a new one for us. Strongbox Zero is a version of the Strongbox you know and love, but with all the networking code stripped out. It’s for those hardcore few who want nothing but the essentials.

Think of it as the drag racer version of Strongbox. We’ve eliminated all iCloud, Dropbox, Google Drive, and OneDrive support. Also, Import from URL, Transfer over Wi-FI, HIBP audit, and FavIcon downloading code. We’ve compiled out any and all 3rd party libraries we could and eliminated our own networking features. Basically, it’s as close as you can get to air-gapping Strongbox without actually air-gapping your device.

We know this isn’t for everyone, but we wanted to go the extra mile for those true security heads. We’d love some feedback on it, however we don’t recommend this for the casual user. Instead, we recommend getting to know Strongbox through the Free version and if you think local databases only are for you, then go for it.

You can find Strongbox Zero on the App Store here.

Strongbox has long supported WebDAV and SFTP on iOS, but more recently we’ve added support for these protocols on macOS. This means you can move to fully hosting your own databases, on your own server, and access them on iOS and macOS.

WebDAV has become a popular method of hosting databases because of the rise of Nextcloud and Owncloud software. These options allow you to get the same kind of polished integration you get with the commercial cloud drive providers but completely and totally hosted on your hardware.

We’ve been playing with these setup’s internally, though we still love SFTP for that old school vibe, while public key authentication gives us a warm fuzzy feeling. 😎 What’s your favourite hosting setup?

This one is a biggie for those you on the bleeding edge… Strongbox now runs fully natively on Apple Silicon. We had so many requests for this, even though Strongbox ran perfectly on Rosetta. People just love squeezing that last ounce of juice out of their machines!

We had to perform some compiler magic, say a few prayers to the LLVM gods, and become more familiar with third party libraries than we would have liked, but the result was worth it. Of course, we still support the good olde x86 architecture too. Sorry, you can’t use us as an excuse to upgrade!

We know we’ve got a lot of work to do when it comes to bringing our macOS UI up to the polish we have on iOS. The current macOS app is looking a little dated and has its quirks. A bit like ourselves. So, over the next few months we’re pouring resources into really improving things for you. Expect to see a more polished finish and a few perhaps more than cosmetic changes to how Strongbox works. We’ll try not to be too drastic, but it’ll certainly be more than a facelift. This should however enable us to bring the macOS App up to full feature parity with iOS. Just a heads up!

More ink (pixels?) has been spilled on this than I think AgileBits ever expected. The outcry was immense. 1Password, one of the world’s most popular password managers, made the fateful decision to abandon many of its most ardent supporters. In one fell swoop, they dropped support for local vaults (our specialty), introduced a new pricing model, and decided to use a (controversial) UI development technology alienating former fans. Quite the coup…

We’ve been inundated with queries and requests, and we’ve been struggling to try to help 1Password migrants come over to the open-source password management world. We were a little slow due to the complexity of 1Password’s export file format, but we finally got our 1Password import feature finished a few weeks ago and the feedback has been pretty positive.

So, if you’re a curious 1Password user, why not give it a try? One thing we do promise is not to switch to Electron on you. 🤢

As ever, we’ll be running a 20% off sale on all our Apps this Black Friday through to Cyber Monday. We’d love for you to get a bargain and you’ll be supporting us scrappy Indie devs too. Just a heads up, so you can let your friends and family know.

And for those of you on the other side of the pond, happy Thanksgiving. Oh and happy Hanukkah too! Perhaps you can espouse the benefits of using a password manager to your more security challenged family? What a dinner topic!

That’s it from us at Phoebe Code headquarters here in London. We hope we kept things short, sweet and interesting. Let us know what you thought or if you think we should cover anything in the next newsletter.

BTW, if you’d like to show your love and support, the best thing you can do (apart from purchase a license!) is to leave a review for us on the App Store. It would mean the world to us if you left us a short 5 star review. 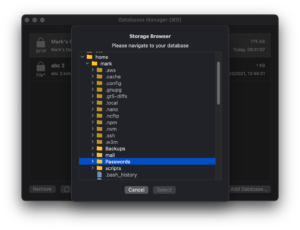